As many of you know, our hometown concert last month was cancelled due to weather. We decided to re-schedule for the Fall. Thus, we are happy to announce we will be performing November 5th at Whitewater Music Hall in Wausau. Tickets are available now for just $10 at the link below. The last time we played Whitewater the show did pre-sell out, so get your tickets now! See you later this year!

We are excited to be a part of the this summers  installation of Wausau Events "Concerts on the Square" series. We will be performing a free - all ages,  outdoor concert downtown Wausau right on the 400 Block (401 N. 4th St. Wausau, WI 54403)  on August 11th (6:00 - 8:00pm). You can BYOB or drinks & food otherwise there will be food trucks available and/or local downtown dinning options. See you then <3

"Young One" is out everywhere now! You can purchase your copy on vinyl from our online store. Hope to see everyone this Saturday at Whitewater Music Hall.

Lonely is the Heart 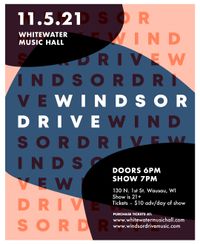 Windsor Drive will be performing live at Whitewater once again! Doors @ 6pm Opening Band @ 7 - 7:45 TBD Windsor Drive @ 8:15 - 10pm Tickets - $10 / 21+ We decided this would be the best way for us to makeup for the unfortunate cancellation of our Concert on the Square date. Our last event at Whitewater sold out, so make sure to get your tickets fast and ahead of time folks 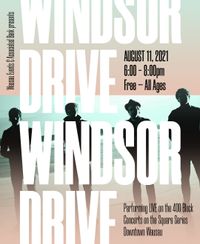 Windsor Drive will be performing live on the 400 Block - Downtown Wausau as part of Wausau Events - "Concert on the Square Series" August 11th, 2021 from 6:00 - 8:00pm. They will be performing a collection of songs from their most recent album release "Young One" (available on Spotify/Apple Music), their past catalog, and some fun covers everyone can enjoy! The show is rain or shine and runs from 6:00 - 8:00pm. BYOB or any beverages, food trucks and downtown dinning is available! This is a free - all ages outdoor event! Windsor Drive's performance is presented by Wausau Events & Associated Bank.

Come celebrate our album release show and our first hometown performance in 5 years.

Under the Weather: CD

Windsor Drive is an American indie rock band from Wausau, Wisconsin formed in 2006. Taking their name from a street in their hometown, the band’s roots can be traced back to a friendship between Kipp Wilde (vocals/keys) and Owen Jones (drums) who met while playing music at Wilde’s father’s church. Kipp discovered piano at a young age but was re-inspired to explore the instrument and songwriting after discovering Ben Folds. After shuffling in and out various members, the band finalized their line up adding Jon Wasleske (bass) and Daniel Sukow (guitar).

The group got their start by throwing their own shows in VFW Halls and bowling alleys, helping establish a local scene in a town that didn’t have an all ages music venue. The following year, the band relocated to Texas and brought a batch of songs with them and would collaborate with producer and EMI recording artist Robbie Seay, this would turn into their first release “Meet the Tide (2008.)” This release landed them a management deal with Ping Pong Music – Stephen Short (Augustana) and the following year would track a five song EP at Sonic Ranch in El Paso, TX titled “Bridges (2009)” with Short producing.

After several regional and national tours to support their initial releases and pushing over 15,000 units independently, the band caught the attention of many nationally renowned acts and supported select dates with artists including American Idol winner Kris Allen, Ryan Cabrera, Imagine Dragons, Walk the Moon, and The Rocket Summer. In 2011, the band supported renowned Tooth & Nail act Mae on their farewell tour “Goodbye, Goodnight.” Coinciding with the tours came the limited edition Under the Weather EP (2011) which claimed them the spotlight on E! News with Ryan Seacrest and a feature on Clear Channel’s iHeartRadio.

The band logged 300 shows between 2010 and 2012 and entered the studio with multi-platinum producer John Fields (Jones Brothers, Switchfoot) for their next release Wanderlust. The release was a step in a different direction for the band, who experimented more with 80’s synths and vocoders to incorporate more of a dance pop element to their sound. Windsor Drive supported Universal Republic artist He is We on the “Give It All” Tour in 2012 and followed it up with a spot on the Vans Warped Tour.

In 2014, the band released their self-titled full length, a collection of their previous EP’s on Cars and Calories Records in Japan and embarked on their first overseas tour. Later that year that same release was distributed in Europe and the UK via AOR Heaven.

It’s been almost 5 years since the band has released music and Young One due out December 6th, 2019 is the next chapter. The unfamiliar. It can be a scary place, but also a beautiful thing. The journey from completely losing the feeling of oneself and the growth to regain a feeling of normalcy is celebrated in the songs penned on this release.